Only in Hong Kong….

…the home of South China seas’ physically perfect trophy wives… women that have the talent to verbally render the full specs of an S-class by heart. Where Louis Vuitton ads vandalize more of the city than graffiti itself.  Lost foreign tourists tromp around in their sporty walking shoes looking about at the skyscrapers glaring from their high thrones while being ignored by walking, willowy British models that receive insecure stares from their fat, dumpy counterparts. The suits are robotic as every white man and every Chinese man, for once, look almost exactly alike as they:  Work. Lunch. Look cool. Walk fast. Back to work. Look important. Cool. Repeat.  Watching the suits walk about in their daily activities is like watching a poker face; the day forecasts unreadable expressions.

Hong Kong’s disparate qualities elicit my obsession.  It’s a bipolar city if I’ve ever seen one.  Aside from being a representation of both East and West, it holds other extremes.  The homeless sleep in front of the billion-dollar profiting Coach store in Central.  A man in ripped jeans, a worn shirt and slippers that came from antiquity is, with all his might, pushing his calloused, permanently dirt-stained feet to shift a trolley of 30 large trash bags in front of an Emporio Armani store that is….. selling ripped jeans, worn looking plaid shirts and antique-looking shoes.

On the flip side of Central’s flash, head into Shep Kip Mei and witness tenements that imitate gigantic barges of 4rth class bunk rooms floating above a swirling population and waves of action.  Here, witness the tales and hear the echos of the mainland’s earliest citizens escaping former poverty to welcome a new poverty in attempts at making their daily rice.  This is a different downtown. It’s not central but the center of true culture rests and works here.  Observe row after row of the fishermen’s catch…food being eaten in the exact same way since ancient times.  Chinese medicine stores sell roots and herbs in the manner they have been doing for over a thousand years.  Spirits of the ancestors are impossible to exorcise as ancient secrets keep a nation’s culture alive.

Highways, streets and overpasses are interwoven back and forth between each other like concrete stitching attempting to hold together each section of the city bursting at the seams from its frenzied pace; the ancient left sleeve is now connected to the modern right sleeve…fit to be worn by one who can manage the balance.  Here is a city where you can pursue a thousand-dollar dinner or a few-dollars meal.

I try to understand you, Hong Kong.  You are beautiful and ugly in your own crazy way.  You are the capitalistic, Eurasian bastard child of China and Britain, you are confused with your materialistic addiction yet your traditionalist ways also keep you in check.  Always remember your past.

The richest belie their true selves within you and the poorest stand in queue with their wishful thinking to follow.  I am leaving you for Japan tomorrow.  Will miss you.

——————————————————
Pictured Above: Adorable little one I briefly encountered in my exploration of busy Hong Kong streets. Her mother was pawning used items on the side of the street. I melted into this vision; an industrious area of women pushing huge trolleys of recyclables, selling goods and lugging their groceries home to cook for their families…all the while the young girl tends to matters of her lollipop and a white, spotted cat on the top left of a store awning keeps its back to the street. Little by little, the girl who I call “mei-mei” (“mei-mei” means “little sister” in Mandarin, Chinese) came curiously closer to me. ‘Why would I want to photograph such a regular day in life?’ she might have thought. 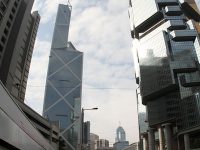 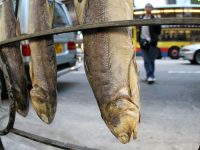 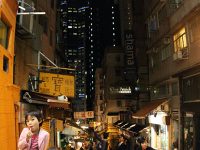 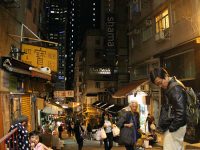 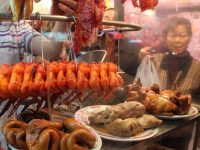 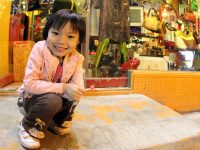 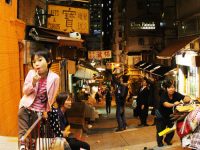 Cute kid. Quite a large contrast of the gleaming skyscrapers in the background and the poor woman who has to sell her possessions to eat.